Having a Voice and Saving Lives: A Qualitative Survey on Employment Impacts of People with Lived Experience of Drug Use Working in Harm Reduction 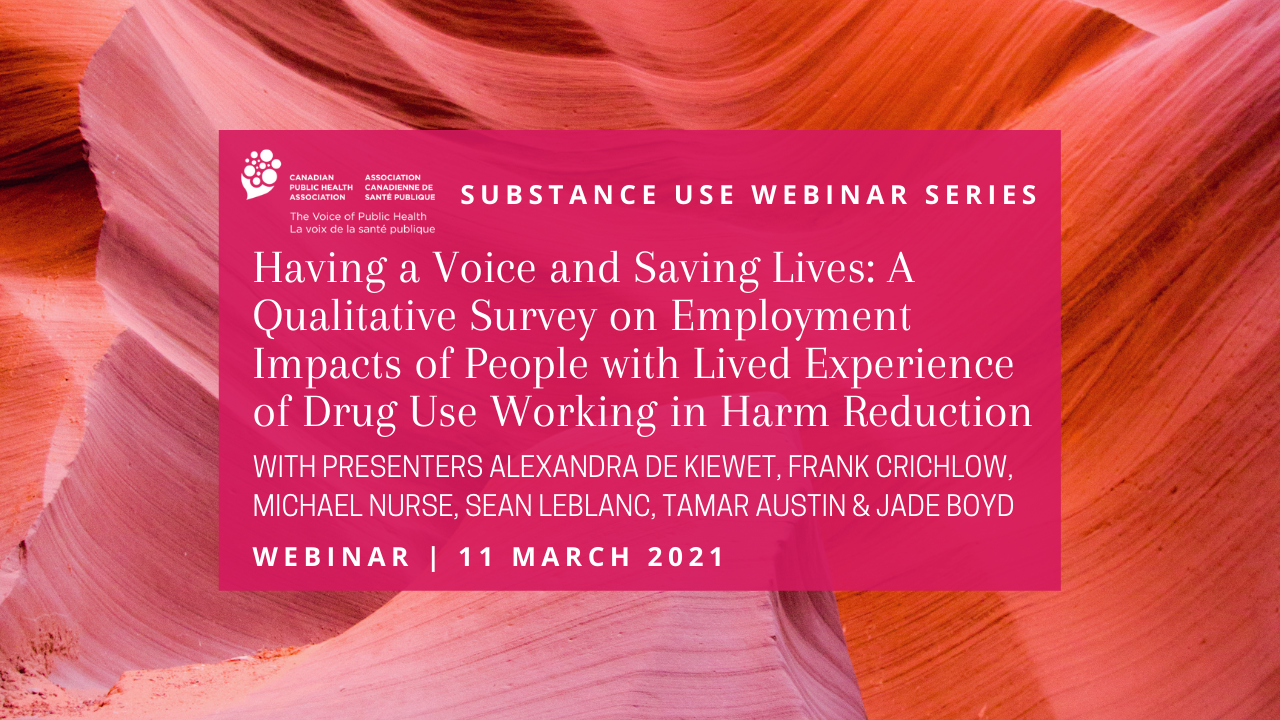 The involvement of people who use drugs working in harm reduction has been a significant and expanding component of overdose prevention interventions across the nation. While such initiatives have proven effective in decreasing drug-related harms among PWUD, there exist unintended negative impacts. In 2018, at the National 2018 Stimulus conference held in Edmonton, Alberta, 50 qualitative surveys were completed by people with lived expertise (PWLE) of drug use working in harm reduction from across Canada. The surveys focused on the benefits and negatives of “peer” employment and recommendations for organizational transformation. In this webinar, the CRISM PWLE of Drug Use working group presented on the survey’s findings, while discussing their own experiences working in harm reduction.

Sean LeBlanc was born in Nova Scotia and arrived in Ottawa in 2000. Sean has survived an opioid dependency, homelessness and incarceration. After facing adversity he founded the Drug Users Advocacy League in 2010. Sean was later the co-Principal Investigator of the PROUD Study: Participatory Research in Ottawa Understanding Drugs -at the time the largest community cohort study in Ontario. Sean is dedicated to improving the quality of lives of people who use drugs. Sean loves his long term partner Catherine, and being from the Maritimes.

Michael Nurse resides in Toronto. He is an elder and a father of two adult sons and an adult daughter. Michael works in Toronto delivering harm reduction-guided support to people who are experiencing challenges related to the use of psychoactive substances.

Frank Crichlow has been a harm reduction worker for over 12 years with COUNTERfit harm reduction program at South Riverdale Community Health Centre. In his role at COUNTERfit he provides both on and off-site harm reduction education, referrals and distribution. Frank works at both SRCHC’s safe consumption service (keepSIX) and volunteered with the Toronto Overdose Prevention Site at both Moss Park and Parkdale unsanctioned sites. He helped to start and still works at the Riverdale Men’s Group, a wellness program at SRCHC.  Frank is a member of the Stigma & Discrimination Group, the Strategic Implementation Panel and the Drug Policy Committee of the Toronto Drug Strategy, Toronto Public Health. He is a member of the City of Toronto’s Confronting Anti-Black Racism committee. He is the Chair of the Toronto Drug Users Union and a member of the Toronto Harm Reduction Alliance and on the Board of the Canadian Association of People who Use Drugs. Frank has spoken on issues of harm reduction for a variety of audiences and venues including academic conferences, research ethics boards and community workshops.

Tamar Austin MPH, is a Research Coordinator at the BC Center on Substance Use, whose is focused on exploring the experiences of women who use drugs, labour and care. Tamar is also passionate about addressing issues of racism, gender-based discrimination and their resulting inequities.

Jade Boyd PhD, is an Assistant Professor in the Department of Medicine at the University of British Columbia and a Research Scientist with the BC Centre on Substance Use. Her work is supported by a Michael Smith Foundation for Health Research/St. Paul’s Foundation Scholar Award.

All People, All Pathways

Having a Voice and Saving Lives: A Qualitative Survey on Employment Impacts of People with Lived Experience of Drug Use Working in Harm Reduction

Supporting the full participation of people who use drugs in policy fora: Provision of a temporary, conference-based overdose prevention site